Nestled high above downtown Cincinnati and the beautiful Ohio River; historic Mount Adams has shared a rich and fascinating history with the City of Cincinnati. Named after President John Quincy Adams, who in 1843 delivered the dedication address for what was then known as the world’s most powerful observatory, the Hill has long offered pleasant, convenient neighborhood living.

During the early 1800s, Nicholas Longworth, America’s second richest man, grew grapes in his Garden of Eden, today’s Eden Park, and produced his famous Golden Wedding Champagne, which helped qualify Mount Adams as the birthplace of the American Wine Industry.

Art came to Mount Adams in the 1880s when the Cincinnati Art Museum and the Cincinnati School of Art opened in Eden Park. Maria Longworth Nichols Storer, granddaughter of the aforementioned Nicholas Longworth, moved her Rookwood Pottery from a spot on the Ohio River to the Hill in 1890 and began winning national and international awards.

The Mount Adams Inclined Plane Rail Road was a sentinel event in Mount Adams history. It made travel to the Hill easy and was the catalyst for a home construction boom that lasted from the 1880s to the 1910s.

The Highland House opened at the top of the inclined plane in the 1870s and was a pleasant spot to escape from the crowding and pollution of the Cincinnati basin. Visitors could dine, drink in the biergarten, listen to orchestra music, dance, bowl or just take in the beautiful vistas. 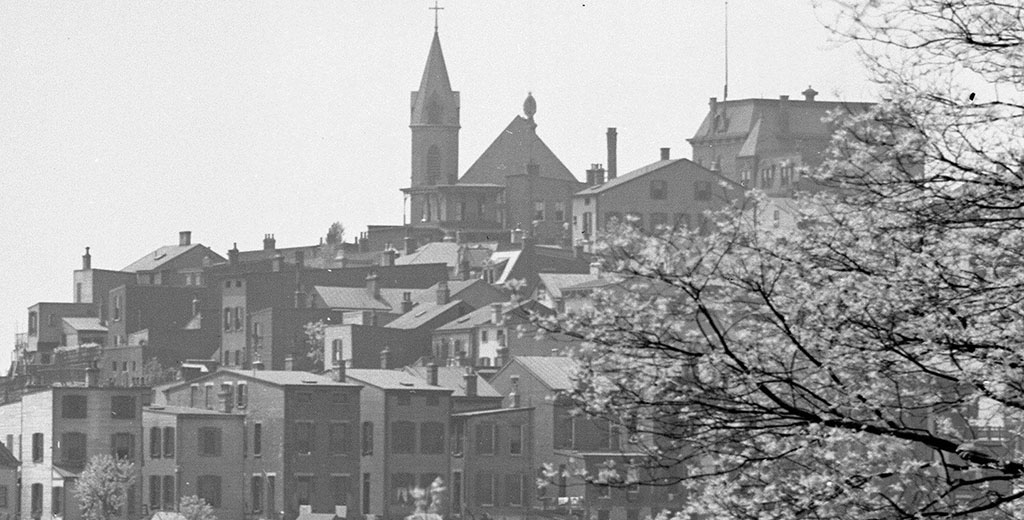 Mount Adams was also home to two Catholic Churches, one for Irish and one for Germans and a third for Protestants, Pilgrim Chapel. Immaculata Church was the German church and hosts the annual Good Friday Pilgrimage, a 150-year plus Cincinnati tradition. The Irish Church, Holy Cross, was home to the Passionist Fathers and their Monastery until it closed in the 1970s.